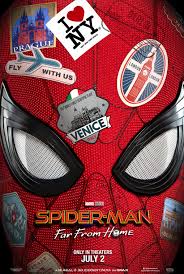 What a world we live in.  Fellow comedian Cristian Duran posted on Facebook: “In 2002 I would have shit my pants if you told me that one day there’d be 3 different Spider-Man 2’s.”  The first S2, amazing.  Easily one of the top 3 Spiderman films.  Second S2, awful.  So this brings us to the latest Marvel iteration.  SFFH starts out 5 years after Avengers: Endgame.  Half the world died, or as they call it, blipped.  Those who blipped aged 5 years and they give a cute explanation how this works.  Even though it’s 5 years after the fact, Peter Parker (Tom Holland), still pines away after the loss Tony Stark in EG.  Hey, if you haven’t seen the 2nd highest grossing film of all time by now, that’s on you.  What’s next, you missed Keyzer Soze is Kevin Spacey?  Darth Vader is Luke’s father?  Michael Cera gets DP’ed at the end of Superbad?  Yep, deleted scene.  Check it out if you don’t believe me.

Anyway, Parker continues to cry for Iron Man like some people still carry the torch for Jerry Garcia.  Yuck, what an overrated band, the Grateful Dead.  And while PP misses Stark, Happy (Jon Favreau) is trying to slide into Aunt May’s (Marissa Tomei) inbox.  Hilarious interactions throughout because the last time any version of Aunt May was having guys kick game to her was during LBJ’s presidential tenure.  And Peter is trying to make magic with MJ.  Zendaya (she’s too young and unaccomplished to pull off the single name yet) is the perfect nerdy-ish neighbor that MJ was.  I liked Kirsten Dunst (her body is fantastic, her snaggle teeth are not) in the original trilogy but Zendaya and Holland have great repartee in this film.  Jake Gyllenhal enters the Marvel Universe as Mystery, well known Spidey villain who enters as a good guy fighting the Elementals, villains in the form Earth’s elements.  And it wouldn’t be a Marvel film without Samuel L Jackson mailing it in for a paycheck.  Just kidding, he was better here than he was in Captain Marvel.  Thankfully, film scribes Chris McKenna and Erik Sommers save SLJ with some great lines and pretty good jokes with Holland regarding PP’s phone etiquette.

Parker, his buddy Ned, MJ, and his classmates go on a class trip to Europe along with new teacher with the king of mumbling, JB Smoove.  I don’t get JB Smoove.  At all.  EVER.  Of course, Parker wants to make the moves on MJ but gets stopped because surprise, bad guys (The Elementals) appear along with Mysterio who saves the day.  Nick Fury and Maria Hill show up to make sure Peter helps fight off the bad guys.  How dare they make Peter be an adult/Avenger when Peter is just trying to blow off some steam and execute his Shakespearean love plan?

Let’s fast forward to the meat.  Yes, Mysterio turns sour and the main reason was just meh for me.  Were the battle scenes great?  You bet.  There are plenty of funny moments and it’s fun to see Spidey and MJ’s romance begin to blossom.  But my biggest issue with the film was the constant love song that’s consistently being sung by Spiderman.  Want to devote the first act with Peter still mourning (again, 5 years after the fact)?  Fine.  But he STILL carries on throughout act 2.  Some people argue that Spiderman played a “Robin” role in Spiderman: Homecoming.  I can see the point but I enjoyed Homecoming more than this one.  Why?  I LOVED Keaton as Vulture more than I liked Bubble Boy as Mysterio.  I just found his logic for wanting to screw over Parker and his plan for domination to be a bit weak.  Yes, the effects are great and the final battle scene is cool.  But again, this didn’t grab me as much as Homecoming did.  This is still enjoyable and boy oh boy, that first post credits scene is a TOP 3 ALL TIME SCENE.  You heard me.  And when it happened, I literally yelled out, “Oh SHIT!”  Check this out but lower your expectations a tad.