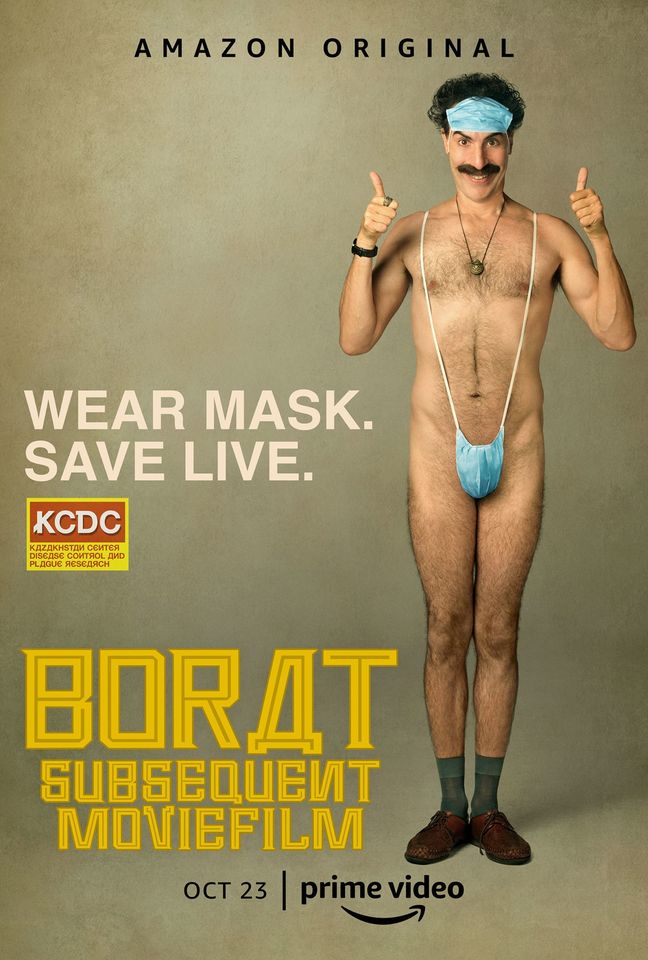 I wrote a review on Borat 2, go to my blog to check it out.

Well, it finally happened and it took 6 weeks to do it. I had my first losing week last week, 3-4. Down to 59% ATS this year, first time below 60%. Got super lucky with Indy, insanely unlucky with the Ravens, and watched the Cowboys shit the bed hard. What in the living fuck was I doing putting hard earned money on Andy Dalton? Just like Ghislane Maxwell, let’s forget everything before now and move onto this week.

Green Bay got raped and pillaged by the Bucs defense last week. Did you know that the Packers had ZERO offensive turnover until last week? And then Rodgers throws a pick 6 and another INT the following series. On the wrong side of that blowout but you know what’s a smart thing to do? Take a good time just off a blowout and against a bad team. GB 4-1 ATS in last 5, 5-2 SU on the road, and 5-1 ATS against AFC. Houston just had a gut punch loss in Tennessee last weekend and they’re just had a black cloud over their heads: 1-6 ATS of late, 4-9 ATS at home. Houston defense ranked 27th which means they’re barely getting participation trophies. Pack 3-0 ATS after losses. Matt LaFleur said they had a shitty week of practice leading up to the TB game. I don’t think they have the same issue this week. The number is damn near perfect so jumping in both feet on this one:

Sam Darnold coming back for the Jets gets me as excited as sitting in traffic. But they’re catching Buffalo at a bad time. Back to back losses and now they’re playing a divisional opponent. Jets are 0-6 ATS and SU this year. Jets under 8/12. I just can’t see a world the Jets score. They’re starting a kicker making his NFL debut and without the only mediocre weapon on offense, Jameson Crowder. The defense has given up 25+ points in 4/6 for the Bills but if they get White back on defense, this makes this a true shit show for the Jets. Jets have put up over 20 points ONE TIME this year. I love the under but I love it when I MAKE IT PART OF A TEASER!

Second half of that teaser is the game of the week. Those yinzers and butcher of the English language from Pittsburgh are undefeated and they’re also facing the Titans of Tennessee, also without a loss. Pitt 4-1 ATS of late and I know, they’re not as good on the road. Their D is in the top THREE in all the land. But Tenn is 2-4 ATS of late and their defense has given up 30+ points in 3/5 games this year, also ranked 26th. The line flipped to Pitt getting 1.5 points this week as I think the public is still trying to figure out the Titans. You know what’s even easier to figure out? Not 80’s hairdos, that’s for sure. That’s a lot of cocaine and shitty Duran Duran music influencing our judgement. Taylor Lewan (lineman) out for Titans and Pitt yields a scant 2.6 YPC, lowest in NFL. I think Ben definitely keeps it close but nothing better with a 6 point buffer…

Second leg of the teaser-Pitt +7.5

I don’t want to live in a world that the Chargers can’t beat the Jaguars. I also don’t want to live in a world that people think Lizzo is hot but here we are. Chargers fresh off the bye and they got Mike Williams back who blew up against the Saints. I know the numbers are against the Chargers and Anthony Lynn can fuck up a cup of coffee. But after the Jags shocked the world in week 1; sans the one game they almost beat the Titans, the Jags are spreading their cheeks like female standup comedians are on Only Fans pages. Jags are 1-4 ATS of late and 0-8 ATS of late. Hell, they’re 3-10 against AFC west. Herbert has looked great out of the chute. Again, I can’t imagine a world where the Chargers don’t cover 7.5 so no better insurance…

First leg of another teaser Chargers -1.5

I’ve learned you shouldn’t bet the Lions unless they’re playing Jacksonville. I’ve also learned Detroit style pizza, not that bad. But you can hitch your wagon to 3 things: Lions can score, Lions D sucks (of late, 24.6 PPG), and Detroit women are as appealing as a Penn Station bathroom. Lions are over 7/8 in Atlanta and 5/7 over vs NFC south. You can apply the same exact logic to the Falcons except Atlanta women are more attractive but more bougie. Is that hell you spell that? Who gives a shit, you’re here for picks, not grading SATs. Falcons D is 32nd in YPP and 31st in total defense. At least their offense has went over 5/7 and 7/8 home against Detroit. We need a second team to tease so let’s make this one easier than an Adam Sandler movie plot.

Second half of the teaser, Detroit over 48.5

So this next pick I locked in on Friday night as I read the Oakland Raiders had 4 offensive lineman on the Covid list. I guess they were too close to each other placing bets at one of their fan’s dogfights. Well amazing news, I read Saturday night all 4 lineman were tested and cleared to play tomorrow. Well, guess who already locked in Tampa -4? This guy. Well shit, these things happen. And of course, the numbers don’t back up this play: 2-4 ATS against Vegas and 1-5 SU in Vegas. Vegas is 5-2 ATS of late but 1-4 at home. Here’s hoping that the Bucs don’t look past the Raiders and that David Carr and his offensive lineman go licking slot machine handles at Circus Circus. Knock on wood if you’re with me.

The name of the game is value. Which is the exact reason I keep your moms around; really good bang for the buck. Stop if you heard this before: The Saints are great in October. The Saints are awesome off the bye. But remember, we bet numbers. And the Saints are down Michael Thomas and Emmanuel Sanders this week, that’s HUGE. Teddy Bridgewater knows that Saints playbook Ben Affleck knows where to find the best blue chip hookers and the shittiest scripts. Saints give up on average, 3 RZ TDs per game. Saints won’t have that raucous home crowd and they’re 2-6 ATS of late at home. Saints 2-4 ATS of late while Carolina 4-1 ATS against NO. I’ll take the points against the Saints without 2 of the WR.

Here’s what I know. It’s supposed to snow like crazy tomorrow in Denver. Like blizzard like conditions. And the total has dropped to 44 KC hasn’t been that offensive juggernaut they were last year and that “run first” offense against Bills on Monday proved that. KC under 4/5 and 7/9 vs AFC west. Broncos under 4/6 and 4/5 against KC. Den under 13/17 at home and 11/12 vs AFC West. Now they go to Denver with a defense that’s stout against RBs. Perfect time to buy some value with another teaser…

First leg of the teaser Chiefs under 50

Seattle 370 passing yds per game. Only guys who haven’t thrown for 300 against Seattle are Kirk Cousins, Kirk Hammett, and Kirk Cameron. Seattle has gone over 4/6 but 5/5 in Arizona and 6/9 vs Arizona. I’m going to ignore the numbers and think Russ off the bye does what he does best and that Kyler Murray gets that Klingsbury air raid going as well

Second leg of teaser Seattle over 48.5

Hello all you cool cats and kittens. 3-3 last week as I won the Gb/KC teaser, Bills, and Mia/over teaser. Lost the Jags, Lions 1h, and TB/under teaser. which brings me to an overall record of 14-7, 67% for the year. So first week that wasn’t profitable but goddamnit, we’re going to hopefully fix it this week.

First up, Washington Redskins. You might be saying, “Why in tarnation are you giving 2 shits about this game? And I’ll say, “Why are you talking like Yosemite Sam?” Haskins is benched and they’re giving Kyle Allen a shot. This is the THIRD cross country trip for the Rams. Chase Young is back and the Skins play tight defense and have a decent pass rush. You saw the Giants disrupt the Rams last week on offense and the Skins have a better front 7 than the Giants. There aren’t many stats to back up my argument because all recent numbers are with Haskins as QB. Pros bet numbers and +7 is a good spot to grab a home dog. As I said, Rams have logged more miles than Bill Clinton and Donald Trump did to Epstein’s private island. And to boot, the Rams have the Niners next week so this could be a classic trap game.

STOP! Teaser Time! Pittsburgh fresh off a Covid bye and now gets an Eagles team who blew their load with that win in SF. Philly stinks, we all know it. And the Steelers d is solid. They’re going to make Wentz look sillier than an Eagles fan trying to take the SATs. under 5/7 in October. Pittsburgh under 8/11 and 4/5 under vs Philly. One more, 10/13 under vs NFC East. Second half of the teaser. Michael Thomas is now questionable but NO still has 2 CBs that are injured. Justin Herbert gunslinger his way to almost beat the Bucs but Anthony Lynn gives people as much hope as a public defender. Saints looked great in Detroit after being down 14-0 early but made the Lions go from Beverly Hills Cop to Beverly Hills Cop 3. Not much data backing me up except for a few key numbers. Saints are 2-5 ATS at home of late. Now, that’s including without fans this year so far. Also, 1-4 at home against the Chargers but those are all Phillip Rivers numbers. We’re playing the numbers and the Chargers are getting over 2 TDs? That Saints d is ripe to get backdoor so let’s take advantage of that key number

Browns just blew up the Cowboys defense. That’s not happening to the Colts D who is top in the NFL. Darius Leonard is out for the Colts but that’s still going to keep the Browns offense curtailed. Rivers has become a game manager and so has Mayfield. No Chubb but Kareem Hunt has stepped in nicely. Browns/Indy under have hit 5/7 and in week 5, 4/5 have gone under.

Seattle is just lighting up scoreboards and finding ways to win. Especially Russell Wilson. I’m not crazy about betting on Kirk Cousins as he’s 12-25 ATS after 4pm EST. Minn 1-5 in Seattle, 1-4 SU against NFC west. Zimmer is 0-2 ATS and SU in Seattle. Now, Minnesota D is also putrid but Seattle secondary has a harder time covering receivers than Pete Davidson does covering his teeth with his lips. Jesus, good thing he has a huge honker because that horse face is tough to look at. Now, Seattle is covering games more than you think. 5-1 ATS and SU of late, 11-4 SU at home. 6-2-1 ATS in week 5 and 5-1 ATS on sundays. You can easily tease this both ways, Seattle laying 1 or Minnesota getting 13. But that Minnesota defense has been BAD of late. Is Seattle going to win at home? Yes. Good, don’t be a hero, just win money. Second leg of the teaser…

Browns 0-5 SU home against Indy but 6-1 SU at home. Browns getting a key number with the teaser. Think they keep it close, under a TD. Add in more of the reasons I cited above for the Browns under. It’s called a correlated parlay when you take a favorite and over or under and underdog. Browns won’t be scoring much which means hopefully they’re keeping it close.

Why is Atlanta giving points to anyone? ATL 1-4 SU in last 5, 2-7 SU at home. They have dominated Carolina at home, 5-0 ATS but A) that was under Ron Rivera and B) Kyle Allen/Cam Newton were QBing the Panthers. We all know that Falcons defense is worse than Al Pacino’s last 10 movies. Carolina has won their last 2 and 1 of their 2 losses have been by more than a TD. So let’s give ourselves more breathing room and bump up the Panthers…