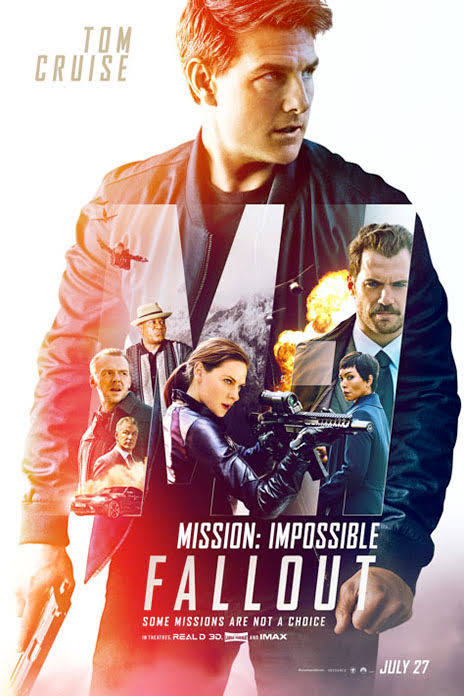 It’s time to face facts.  Tom Cruise is the greatest actor of our time.  He’s done it all except win multiple Oscars.  And films are the one medium that doesn’t need hardware to measure success.  Tom Cruise bats .800 in my book, he’s almost as successful as Emily Ratajkowski giving me a boner.  Cruise’s filmography is as impressive as the lack of cleanliness in a Taco Bell bathroom: Mission Impossible series, Collateral, Risky Business, Rain Man, Edge of Tomorrow, Minority Report, Eyes Wide Shut (Nicole Kidman is just magical) and American Made to name a few.  Daniel Day Lewis is amazing but he doesn’t have the rewatchability nor financial successes that Cruise has.  Same goes for DiCaprio but I’ll accept Tom Hanks as a viable contestant.  Early critic reviews had described this latest installment of Mission Impossible as the “Skyfall” or “Dark Knight” of the franchise.  Is it?  Let’s find out.

Tom Cruise returns as Ethan Hunt, a much more entertaining version of Jason Bourne.  Hunt and his perfect multicultural team of Ving Rhames and Simon Pegg drop the ball in the film’s opening sequence by letting plutonium get away from them while the Syndicate (callback from MI: Rogue Nation) is trying to create bombs to nuke the world and start from scratch.  I think we should just start calling this plot line, “The Thanos Snap.”

Hunt runs into Ilsa Faust (Rebecca Ferguson), MI-6 agent who he battled with in Rogue Nation, as she’s trying to stop Hunt from transferring Lane (also from RN) to the terrorists with the plutonium.  Action ensues, a lot of action.  You know how every MI film has at least one insane action sequence?  The climbing of the hotel in Dubai.  Climbing up an airplane during take off.  This film has at least 5 of those, “get the fuck out of here” moments.  Why does this film work so well?  Those insane aforementioned action sequences as well as a fantastic plot.  Different twists as well as this the first film in the franchise that calls back to previous films.  Hunt’s wife, Michelle Monaghan, from MI-3 returns in a pretty cool story arc.

The ONLY “knock” is this clocks in at 2.5 hours.  Does it drag?  Not one bit.  But some people are sticklers on time.  But the action and plot skyrocket this film as the best of the franchise.  So yes, this is indeed the Dark Knight and Skyfall of this series.  MI: FO is a goddamn tour de force and I shall probably see this again in the theaters.