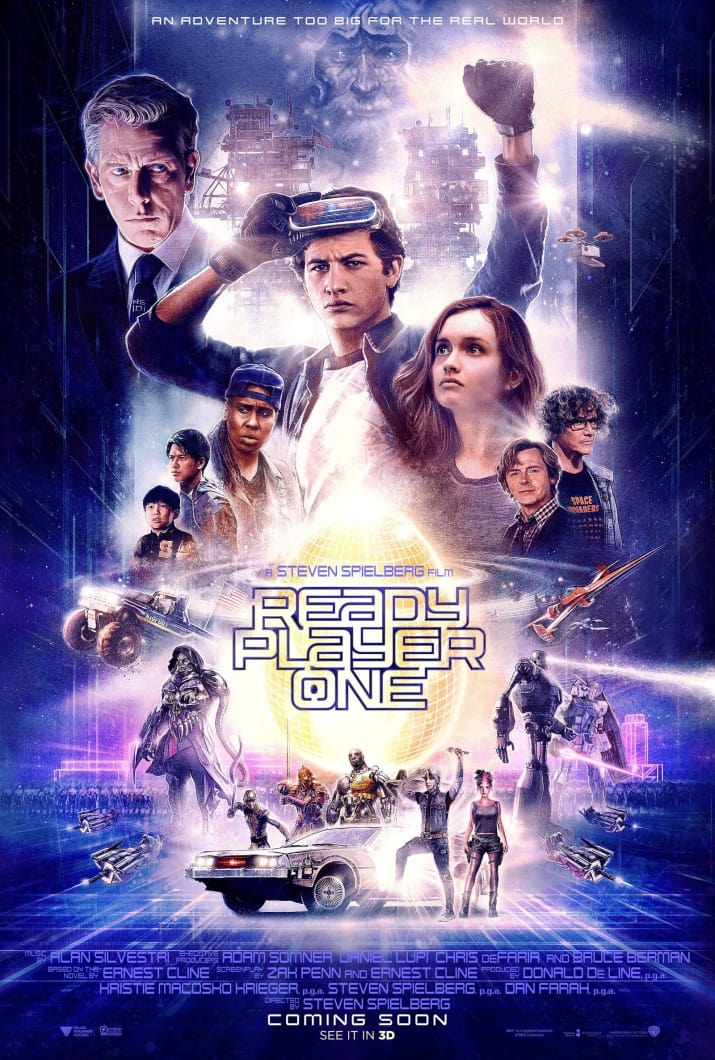 There are between 1-3 films I have circled every year that I absolutely cannot wait to see.  This year, it’s Avengers: Infinity War, Sicario 2 and Ready Player 1.  One is an obvious superhero sequel, the other is a sequel to what should have been nominated for best picture.  And that leaves Ready Player 1, which  is one of my favorite books of all time.  If you’re not familiar, you need to do so reallllly quickly.  It’s the story of a Wade Watts (Tye Sheridan), a young man who along with millions of other of citizens, take on a challenge to find a digital “Easter Egg” in the OASIS.  The OASIS is a VR world which is as real as you want to make it.  The winner of the challenge presented by recently deceased creator of the OASIS, James Halladay (Mark Rylance), wins his fortune and control of the OASIS. And of course, there is an evil CEO, Nolan Sorrento, (Ben Mendelsohn) who will stop at nothing to control OASIS. Halladay is a Bill Gates type who grew up in the 80’s, addicted to video games and films from the time.  All of his challenges have to do with both video games and films so turn the nostalgia factor on full blast.  Steven Spielberg directs this film and who better to take us down that road.

Parzival was initially against “clanning”; which is nerd speak for others joining is eventually joined by lady crush, Artemis,  ninjas Sho and Daito, and his best friend, Aech.  They call themselves, “The Top 5,” and they all mesh together quite well and especially when their real identities are given.

There are an absolute shit load of references, characters, and nods to films/video game characters throughout.  You’ll go crazy trying to keep track of whom and what you saw but I’ll give you a few: Goro from Mortal Kombat, Chun Li from Street Fighter, Freddy Krueger, Jason Vorhees, Robocop, the baby Alien, and even caught a Jack Slater from Last Action Hero reference.  Wade Watts’s OASIS character, Parzival, even drives the DeLorean from Back to the Future with the KITT from Knight Rider lights in the front.  Movie nerds and video game nerds, rejoice.  Scoring the film are 2 juggernauts from the 80’s, John Williams (if I need you to tell you what films he’s worked on, deport yourself) and Alan Silvestri (Back to the Future trilogy).  And you’re going to hear a TON of nods from their previous films in the score.  And you will smile.

So let’s do the eventual annoying “book to film” comparison.  The book was amazing because Wade had to play Joust with one of the guardians for the keys.  Wade also had to do “film syncs”  scenes from War Games and Monty Python and the Holy Grail.  In the film, they don’t do either.  The first challenge is a race, the second is a scene within, “The Shining.” And the third is playing, “Adventure” on Atari.  I wish that Spielberg would’ve chosen different challenges, including doing the film syncs.  I know that would’ve brought the same charm and allure that the book brought.  My other biggest complaint is that one of the “Top 5” die in the book but Spielberg pulls the typical “everything ending is a happy one.”  Spielberg kept a ton of the book’s integrity (also noted that RP1 writer Ernest Cline did co-write the screenplay) by tweaking a few things, like the Zemeckis cube.

This film is good and you will get sucked into it without question.  The ongoing references and nods within the score will always keep an ear to ear grin.  But those 2 omissions are glaring ones and major points are deducted for such.  Otherwise, it keeps close to the book and Spielberg does his best work in over a decade.  It will also be the perfect excuse to get your kids researching the great films and games I/we grew up on. 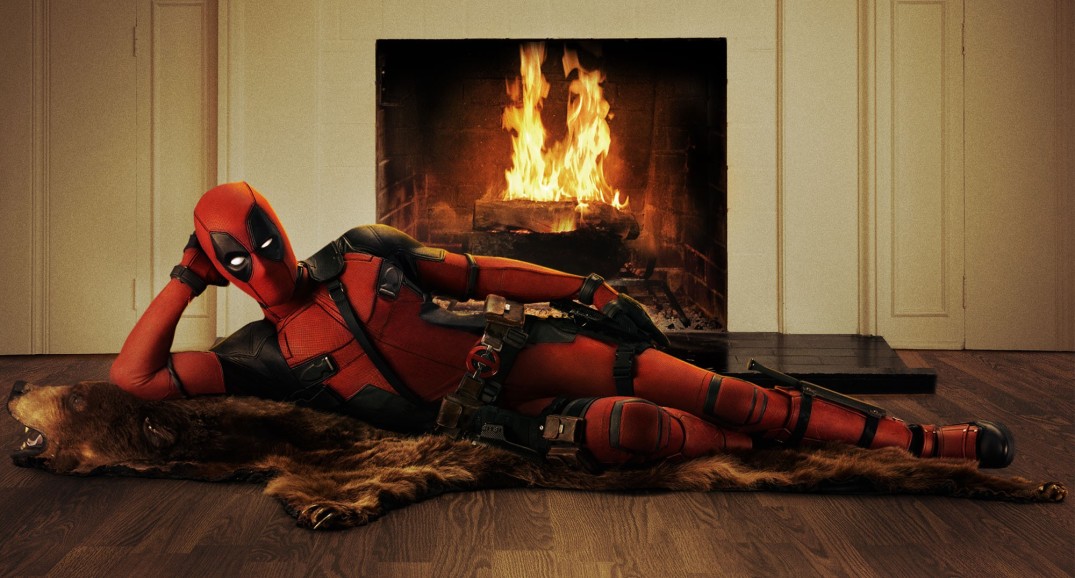 Here we are, Valentine’s Day weekend and what USUALLY comes out this weekend in the theaters are lazy romantic comedies (How to Be Single.  Can we just throw a saddle on Rebel Wilson already?) or sequels that no asked for (Zoolander 2.  My streak of not seeing Ben Stiller movies is intact since I wasted 90 minutes on that piece of donkey shit, Tower Heist.)  Thankfully, the prodigies at Marvel studios picked a perfect time to drop their first superhero film of the year (Captain America 3 and XMen Apocalypse come in April and May) and Marvel opens with a hit.

For those of you who haven’t completely blocked Wolverine: Origins out of your minds yet, you’ll recall Ryan Reynolds was in that film, playing Deadpool.  You’ll also remember how that abortion of a film mutilated (pun intended) a perfectly good character and didn’t let Reynolds do the wisecrackin’ for more than 10 minutes until they literally sewed his mouth shut. Thankfully, writers Rhett Reese and Paul Wernick let Reynolds do what he does best, crack wise while even shitting on Wolverine: Origins and Reynolds’s other shitbag superhero “effort”, the Green Lantern.  For those of you not familiar with Deadpool, think Van Wilder (Reynolds breakthrough film) who cuts off bad guys heads.  The self-deprecating humor works as does some of the other dick and fart joke material.  Hey, that’s the character!  Some film reviewers get tight assed about that and that’s why no one takes the majority of them seriously.  You mean to tell me nearly EVER 18th century period piece gets at least 3.5 stars out of 4?  No thanks, sometimes people just want to laugh and watch shit blow up.

Obviously, this is the origin story and Reese and Wernick do a great job of telling it efficiently.  They also bring Colossus from the Xmen as well as Negasonic Teenage Warhead.  I had no idea who she is and apparently, she was short lived in the comic book.  I felt the addition of Colossus and NTW didn’t bring anything to the table; it felt like an obvious tie in for the future Xmen films.  So that’s pretty much it for any superhero crossover discussions.

Reynolds jokes are fucking hysterical, couldn’t tell you the last recent film (or even comedy) I LOLed that much.

The flow was perfect, everything wrapped up nicely in 100 minutes.

This is by FAR, the best Stan Lee cameo you’ll ever see.  Not even close

This is by FAR, the best Marvel end credit scene, EVER.

Probably the weakest villain in a superhero film I’ve ever seen.  He’s the consistent English bad guy you’ve seen in every action film, ever.  I’m not familiar with the Deadpool comic book and maybe this guy is the Joker or Magneto of Deadpool but if he is, snore.  No charisma, nothing remarkable at all.

Gina Carano plays Angel Dust.  I had no idea who she was; she wasn’t explained at all except she’s strong.  Nothing substantial about her either…moving along.

The Colossus and NTW addition seemed like a good idea on paper but weren’t orchestrated properly.  It feels contrived and by the end, you don’t care when they show up in the final battle.

This is the first rated R Marvel studios film (the first rated R comic book film was Blade) and it deserves it.  Plenty of violence, cursing, and nudity…just what a growing boy or girl needs.  Congrats also go to TJ Miller for finally landing a role where I don’t want to punch him in the face.

I totally dug Deadpool but I think it will rank 3rd of this year’s Marvel films.  And that’s not a shot at Deadpool, I just have super high expectations for Cap 3 (seriously, the trailer is fucking bonkers and Cap 2 was goddamn amazing) and XMen Apocalypse (trailer again is bonkers, Singer is directing again, and this is Marvel’s crown jewel for a reason.)

I give it a 7/10, it’s totally worth 15 bucks but no need for IMAX or 3D.  And drag your gf/wife to this because honestly, do you want to see Rebel Wilson clogging up a movie screen?  She’s just biding her time until Melissa McCarthy passes over the “annoying fat girl who farts/burps/says inappropriate things” crown.