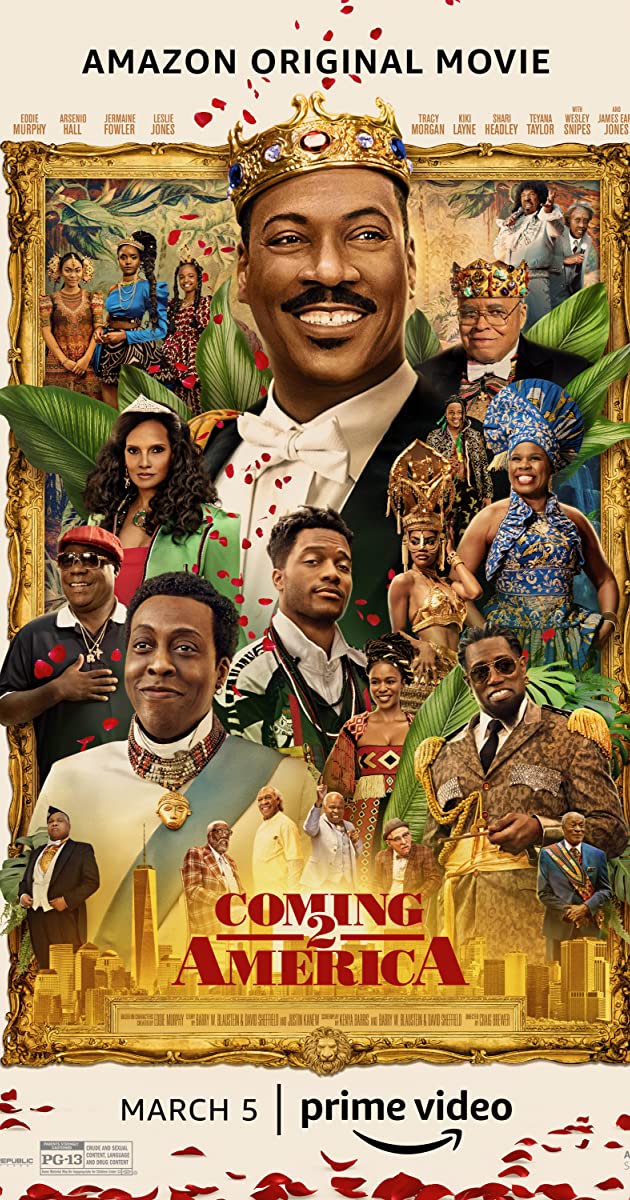 I’ve said it before and I’ll say it again; this should’ve been my senior thesis instead of God knows what nonsense I half hungover typed one May morning in 1999. I was hoping that it would be good enough just so I could gradate and hurry into corporate America. You know, the world you’re usually underpaid and then cast aside as if you were a snot-filled Kleenex if the CEO is going to make 50 cents less in their bonus. My senior thesis should’ve been: “Movie sequels that A) are released more than a decade after the original and B) go from an R to PG-13 RARELY work.” The LONE exception I can think of is Die Hard 4. Yeah, the one with Timothy Olyphant as the cyber terrorist in DC. I liked it, didn’t hate it, like some of you did. It’s FINE, not near as good as 1 or 3. But I dare you, find me a sequel that fits those criteria and I’ll shout you out on the Gutting the Sacred Cow podcast (https://guttingthesacredcow.com/where-to-listen-see-us/).

So here we are, Coming 2 America day on Amazon Prime which seemed to excite the masses like Borat 2, another Amazon studios release. 1988 was when the original was released, 2021 is when the sequel dropped and it’s rated PG-13 so that’s 0-2 in my criteria department. Let’s catch you up to speed: Prince Akeem is married with several daughters but James Earl Jones tells him he’s near death and that the Prince will become King. However, he needs to find an heir to the throne, post haste, because Akeem doesn’t have the strength to be a king and will be assassinated. So Akeem learns he has a bastard son in Queens from his first voyage with Arsenio Hall. And instead of flying commercial like he did in the first film, they use the royal jet to fly back to Queens and coach him up to be a prince. And of course, his wacky uncle, Tracy Morgan, and mother, Leslie Jones, provide for the comedy.

We’re not breaking down the entire “plot” so let’s skip to the review. Positives: looks like Amazon has deep pockets if they were able to lure the actors from the first film to do the sequel. I’m kidding, most of them were probably (I didn’t google to see what the actors are up to, I have to get to the gym in 30 minutes.) Because damn near EVERYONE was available to appear in the sequel. The ONLY people that weren’t in this were the Queens landlord, Lisa’s sister and Soul Glo’s heir apparent, Eriq LaSalle. But EVERY OTHER CHARACTER is in this film. And kudos to Shari Headley (Lisa), she’s aged magnificently.

How funny is this film? I lol’ed a lot…every time one of these tertiary characters appeared in the sequel…as in, HA, holy shit! XYZ person/character is also in this? But laughs that were organic via the script or performance, very…very few. And I’ll wager that if/when you watch it, you’re laughing at the same things these characters did in the first film THAT THEY’RE DOING IN THE SEQUEL. I mean, they took HUGE bath in the nostalgia pool and are counting on you to laugh at the same jokes. The jokes are honest to god lazy. Leslie Jones was the bright spot in this film but on the other hand, Tracy Morgan wasn’t given much to work with. It felt like a waste of his talent on a “barely above generic level” for him. Jermaine Fowler is fine but the punchlines he’s given are just hacky. Example? Sure. He and Leslie Jones have two “uppity bitch says what?” moments. Yeah, that’s not cutting it in my house.

And here’s where PG-13 truly torpedoes this film. Eddie Murphy literally says, “Mother-Fer” You gotta be shitting me. Watching him say that instead of motherfucker is like watching my 5 year old choke down a vegetable she hates. The man made cursing an art form; like cursing in Italian or French, it had a romantic flair to it. Is that the only reason it’s not good? Of course not. But when you get out the good china and flatware like the first one and then remove the covers off of the plates to see you’re being served spaghetti O’s and dirty water dogs, it really takes away from the experience. And no, the royal bathers are not topless in this film. I know, a perk that the first one threw out there for fans of gratuitous nudity. Ahh, the late 80’s/90’s are sorely missed. Unless it’s an arthouse film, nudity today is frowned upon like farting in a packed elevator.

Lastly, they SHOEHORN the fuck out of some of these characters. The barbers come back, fine. But the scenarios Randy Watson and the preacher return…you just say aloud, “You gotta be fucking kidding me.” And I hate when a movie anchors itself solely to nostalgia and crosses their fingers that people aren’t noticing that the emperor is truly not wearing this clothes. Next, I’m not going to give you the, “Eddie Murphy has been dogshit since XYZ year.” Because “My Name is Dolemite” was amazing. And I bet Eddie can unearth some of the magic he had with other films. But that magic just went full blown Muggle in this film. And that’s the first and last Harry Potter reference you’ll hear from me. Thank god I had insanely low expectations for this film (be honest, those trailers didn’t do this ANY favors) and I’m not heartbroken as some of you may be.

You wonder as a baseline what did I think of the first Coming to America? Great question and you can hear it in next week’s GTSC podcast episode with Lauren Sivan who definitely did NOT like CTA.